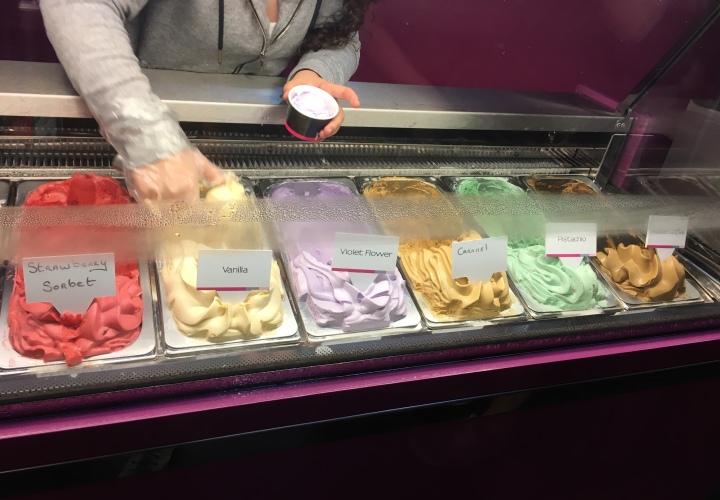 I periodically have ice cream (or other treats) at places that don’t meet my typical requirements for a full review. I’ve decided to point out some recent highlights and thoughts from some less conventional ice cream destinations. Here’s an ice cream roundup from the past year or so. 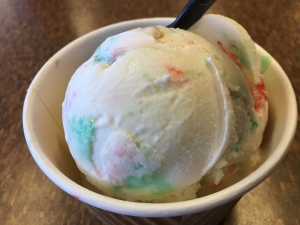 This is an absolutely adorable cafe that seems to have been thoughtfully built when they renovated the downtown theater space. They host open mics and performances and we will most definitely return to play and grab a drink.

In the ice cream department, I was underwhelmed. They carry Shamrock Farms, which I hadn’t had before. Overall the flavors I tried were creamy but weak, including Peppermint Stick, Black Cherry Chunk, Mint Chocolate Chip (both pleasant) and Coffee, which I could barely taste a flavor of at all.

This past weekend I tried their vanilla and chocolate and found them both to be quite high-quality when compared to a Hershey’s or similar cheap, “premium” ice cream. Since Patron’s Hall offers fun powers for shakes and frappes and a variety of other drinks, there are plenty of reasons to return…and the ice cream was also dirt cheap, so it’s a low risk if you’re curious. Free samples too, of course. 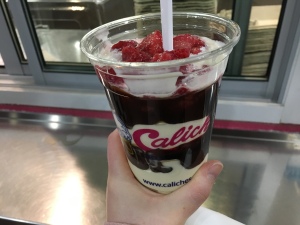 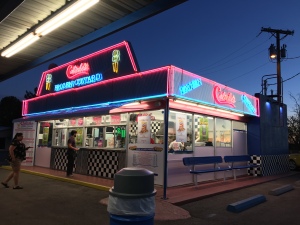 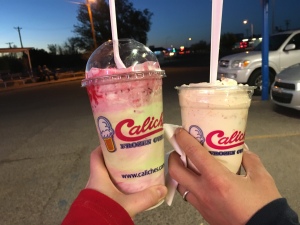 We’ve visited Caliche’s in both Las Cruces and Alamogordo, and though I didn’t grow up eating custard, I feel confident in saying that their custard is delicious. I have not tried the chocolate yet, but the vanilla is fabulous. I had a “caliche” which is custard with mixins – I went for raspberries and key lime sauce. On my second visit, I went for a sundae with hot fudge and strawberries. If you’re going frozen fruit, I prefer a caliche – so the fruit isn’t so frosty – but this stuff is delicious however you slice it. They also have a drive through and offer dog cones (at least in Las Cruces). Their “real” food was tasty if typical fast food quality. Future must-do is a green chile sundae. We will return, Caliche’s! 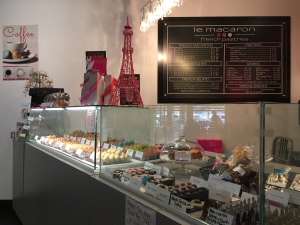 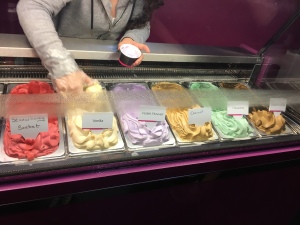 Macarons are generally gluten-free, as they are here, and sometimes you’ll even get lucky and see a macaron ice cream (or gelato) sandwich!

We were told the gelato company featured here is French. The macaron ice cream sandwich with violet was delicious, with a nice chewy and crunchy outside layer. The vanilla gelato was quite creamy for gelato, with a nice vanilla bean presence and almost a tiny bit of a bite to it. The violet gelato reminded me of raspberry, with a really nice bitterness. It’s very subtle. Ross felt it was almost like “What’s the point?”, but I disagree. It’s just understated. It paired with vanilla nicely, but it will be easily lost next to other flavors. Worth a visit for macarons or gelato if you’re in the area…unfortunately there is no homemade ice cream or gelato in downtown Winter Park. (For the homemade stuff, head to Kelly’s.) 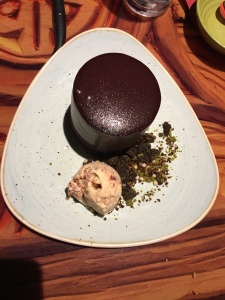 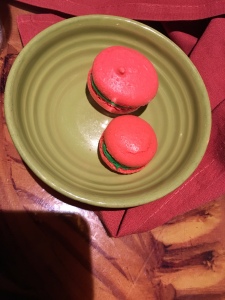 Meals here are amazing (and the setting, with wild animals, is spectacular) but there often isn’t much in the way of gluten-free desserts. But we lucked out at Christmas this past year. They were serving a homemade cherry ice cream in a chocolate-covered cherry entremet.

It wasn’t a perfect or particularly creamy ice cream, but it had beautiful rich chocolates covering the cool ice cream with great flavor and a perfect crumble and mousse. The milky ice cream complemented the bitterness of the chocolate well. And that cherry Kurt was tart and amazing.

The portion was also huge – easy to share. And those who had their macarons described them as a “cloud with frosting in the middle”. So if you can get dessert at Sanaa, go for it…especially the special! 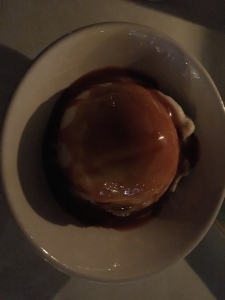 This restaurant was also a fantastic experience. It’s gorgeous, perpetual twilight, inside the Mexico pavilion. I had lots of delicious gluten-free options, and I decided to try ice cream for dessert.

This style of ice cream seems airy compared to what I’m used to…less creamy and almost icy when you swallow it. It had caramel on it, and I could detect cinnamon and nutmeg. It almost tastes like a different product entirely…maybe it’s a condensed milk base? It’s almost rustic. And somehow, though it wasn’t housemade, it didn’t taste like there were preservatives. Very tasty, thanks Disney!

That’s it for today’s roundup. Have you gone out for ice cream lately?

Some past blogs for inspiration: