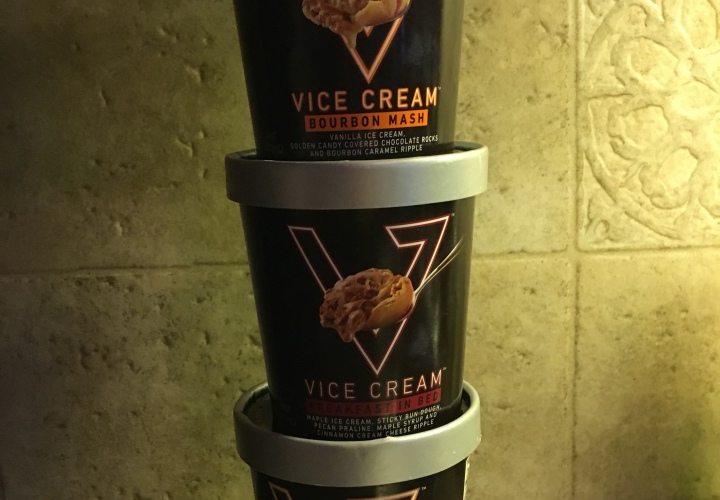 As you probably know, I focus my blogging on local, homemade ice cream places, but when I was offered the opportunity to sample Vice Ice Cream, I couldn’t resist. Vice Ice Cream markets themselves as “the unapologetically indulgent ice cream brand that has gained a cult-following for its decadent, playful flavors such as Breakfast in Bed, Toffee Wife and Afternoon Delight”.

They reached out to me, offering to send a few pints of ice cream to sample. Who says no to ice cream? Not this kid. Most of their flavors are full of glutenous deliciousness (cookies, brownies and the like are common), but they have two flavors without any added gluten. (If you’re celiac or highly sensitive to cross-contamination, you’ll want to skip them all.) I requested the two flavors I could eat, and I recommended a third flavor for Ross, my husband, to sample.

It turned out that the “few” pints promised were actually six! Two of each of the three flavors. Rather than enjoy all the alcoholic ice cream solo, I decided to have an ice cream tasting with our friends. (This same group had shared a whiskey and a wine tasting with us in the past, so it felt especially appropriate.)

As a result, I have feedback to share from three additional friends – Gypsy, Scott and Beth – as well as Ross and myself. Thank you to Vice for the samples and to my friends for sharing their feedback! (I wasn’t compensated or even asked to blog about these, but the ice cream was provided by them, so buyer beware. These pints can be purchased in your local supermarket if you’re curious.) 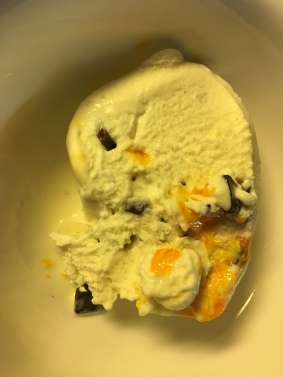 Orange and chocolate combine in this flavor from Vice Ice Cream.

We liked this one. One person said, “This is what you need to make a creamsicle drink”, and people liked the orange and chocolate pairing. Ross’ father would love this.

I found the chocolate to be pretty high quality. The orange ripple was a pretty fake but fun taste, like you’d get in a chocolate orange. The ice cream was quite creamy, like a Breyers. It’s definitely like a creamsicle. One person said it’s like the consistency of the ice cream in a creamsicle….not super creamy, but it’s very nice and melts in the mouth well.

L’orange was refreshing, like a spring blossom, according to one taster. Beth really doesn’t like orange normally, but it reminded her of chocolate oranges. (It also makes sense that it wasn’t my favorite thing because I’m not a huge chocolate orange person).

This is the one that I couldn’t eat, because of the gluten in the sticky bun dough. There isn’t a lot of maple flavor, although you can taste it. The pecans were prevalent, which is great if you like them, and the cinnamon bun is really good, although there isn’t a lot of it. This was also a very smooth ice cream. There’s a buttery hint to it – one person said it was almost like a buttercream chardonnay!

Most of us couldn’t taste the cream cheese, but a few people thought they got a subtle hint of it. It’s an ambitious ice cream that didn’t really hit the mark.

This was the favorite, by far! The bourbon ripple is delicious and the aftertaste is really satisfying. The caramel has a bit of saltiness, which is awesome. We all enjoyed how high the number of mixins was. It’s not overwhelming, though – it’s a perfect balance.

I didn’t think the chocolate was brilliant, but it’s satisfying and doesn’t take away from the bourbon showcase.

Scott described the combo as almost a bit of citrus at the end – it’s actually a bit reminiscent of the first in that way.

Bourbon drizzle sitting on top of the container is so good!

The bourbon ripple is delicious!

Bourbon Mash is the first one out of the cooler.

Thanks so much to Vice for the chance to try your products. We highly recommend Bourbon Mash and would encourage you to have your own tasting session when you’re in the mood for some crazy, no holds barred ice cream.